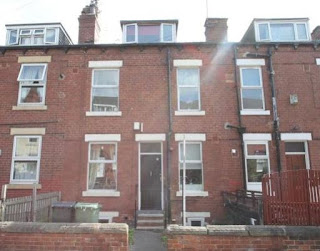 This 4 bed house on Beechwood Terrace has recently been done out and has been nicely finished and attractively decorated. It's located just by Burley Park train station and is only a couple minutes walk away from Cardigan Road with it's numerous bus stops. This location often appeals to both professionals and students so this house would be a great investment as it means you have a much broader market.

This house has got three really good size bedrooms and one slighter smaller one so even though it's been done out really nicely there is always a chance that the fourth room could possibly causes issues letting it out. As the house already has two full bathrooms next to the bedrooms in the basement and the top floor, in my opinion the best option here would be to convert that smaller bedroom on the first floor into an en-suite for the other larger bedroom on the first floor.

Even though you would be losing a bedroom, from my experience having a small bedroom poses quite an issue these days and tenants are less likely to rent out these small rooms even if you were to offer less rent for it.

By creating a desirable en-suite property it would then enable you to rent the house for around £14,040 per annum and you would be safe in the knowledge that all the rooms would be in high demand.

The work involved to install an en-suite & to move some doorways for the other bedrooms to have the current bathrooms as en-suites would only really cost around £5k as nothing else needs to be done so if you managed to get the house for around £135,000 you would then be looking at a good return of 10%.

Remember when you could buy a house for the same price as a 50” telly?

Looking at more recent times, since the start of the Millennium, these increases in property values have generated large increases in equity for many homeowners but on the other side of the coin also making housing unaffordable for other people.

It might interest readers to note that most of Europe experienced sharp increases in property values in the early years of 2000’s, with only Spain beating  us (although we know what has happened to the Spanish property market over the last few years!).  In the 2000’s, the British situation was different in two regards.  First the property value boom started earlier and saw more sustained increases and secondly, the regional pattern was fairly uniform.

However, since 2010, the regional pattern has been completely different in the UK.  Compared with  2007 (the last property boom), average property values today in England and Wales are 1.2% higher, whilst in Greater London, they are 35.7% higher, whereas in Headingley they are 13.44% lower. The London property market has been like a different country.

Looking specifically at Headingley though, it has continued to be difficult for first time buyers to get on the housing ladder.  The best measure of the affordability of housing is the ratio of Headingley Property Prices to Headingley Average Wages, (the higher the ratio, the less affordable properties are).

You  can see quite clearly, even though we had an improvement just after the 2007 property crash (i.e. the ratio dropped), in following subsequent years with Headingley house price’s rising but wages not keeping up with them,  the ratio started rise.  This has meant there has been a deterioration in affordability of property in Headingley over the last couple of years.

This is one of the (many) reasons why the younger generation is deciding more and more to rent instead of buy their own house.  The local Council sold off council houses in the Thatcher years and for many on low incomes or with little capital, owning a home has simply never been an option.
With fewer people able to save up the deposit required by mortgage lenders, more and more people are looking to rent, this has also resulted in a change in attitudes towards renting over the last decade.  This delay in moving up the property ladder has driven rents up in Headingley over the last few years, as more people are seeking properties to rent.  All these things have combined to make the demand for rental property in Headingley rise.

If you are an existing landlord or someone thinking of become a first time landlord looking for advice and opinion and what (or what not) to buy in Headingley, then feel free to give me a call or pop into the office for a chat.

Great property in Burley with a lot of scope for investment 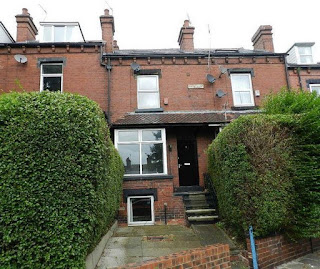 This property on High Cliff in Burley doesn't immediately jump out at you with it's old fashioned interior, somewhat unappealing layout and small bedroom on the first floor but it's definitely got a lot of scope for improvement and could be a great investment.

It's location is highly in demand by professionals with it being so close to Burley Park train station and plenty of main bus routes going straight into Leeds City centre in less than 10 minutes. Looking at the advert, it does say that it could potentially go to a group of students but from my experience it's too far out of the area that student's ideally want to be. The areas much more residential & populated by professionals.

I've given the floor plan a good look and it appears that the property is pretty much a blank canvas depending on how much you'd want to spend on it. If you re-jigged some of the rooms around, you could definitely utilise the space better to create a 6 bed all en-suite property and if done right you could create a high quality boutique professional let which could achieve around £28,000 per annum.

I would suggest moving the kitchen from the basement up to the ground floor where there is currently a bedroom. There's also quite a bit of wasted space with a large hallway on the first floor so I would utilise this space better to create a larger kitchen. Down in the basement I would have two good size en-suite bedrooms; one where the kitchen used to be and by moving the door for the other bedroom to go directly into the bathroom. On the first floor I would use some of the space taken up by the larger bathroom to make that small bedroom larger and in it's place fit a smaller shower cubicle instead of a bath. I would then move the door to the other bathroom to be accessed by the other bedroom. On the top floor I would then add in two en-suite bathrooms.

Depending on the amount you wanted to spend on it there's scope for removing the chimney breasts and fitting dormers on the top floor or at least taking the eves right back to the floor to create much more space.

I'd imagine for the work I've described and to decorate and re-carpet it you'd probably be looking at spending around £40k. Even if you bought it at the asking price of £180,000, I think for a high end boutique professional let with en-suite bedrooms you would be looking at around £90 per room exclusive of bills.  That's a whopping 12.8% return.

Brilliant conversion opportunity in Burley with over 10% return 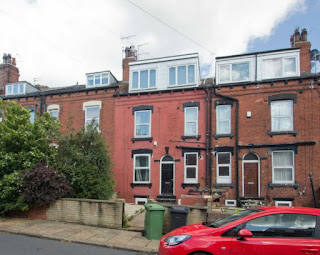 This 4 bed house on Haddon Avenue located in Burley has fantastic potential. Firstly it's positioned perfectly for professional renters as it's close to plenty of local amenities such as Cardigan Fields with it's shops, restaurants and cinema complex. It's also close to Burley Park train station and plenty of bus routes which take you straight into Leeds City centre in less than 10 minutes.

Secondly, and most importantly for investors, this property provides a great opportunity to renovate and create a property that will stand out from the crowd and ensure it rents out all day long and limiting any void periods.

From looking at the floor plan as it is now you'd have a real struggle on your hands to rent out the fourth, small bedroom on the top floor. If you converted that room into another bathroom then you'd create a 3 bed, 3 bath property. Now, if you click the link below you'll find that there aren't any internal photos so obviously an inspection on the property is vital but in order to create a high spec property you're likely to have to put in a new kitchen, new bathrooms, redecorate and recarpet so you're probably looking at around £15,000 for the refurb work. Even if you paid the asking price of £125,000 which I'm sure you wouldn't, you would be looking at a return of over 10%. Plus you can be confident that with such a high spec and appealing property you shouldn't have any void periods.