4,494 Spare ‘Spare’ Bedrooms in Headingley – Is this the cause of the Headingley Housing Crisis?

That isn’t a typo, of the 16,943 households in Headingley, 4,494 of those properties don’t only have one spare bedroom, but two spare bedrooms! … and it is this topic I want to talk about this week, my Headingley Property Market Blog readers – because this could be the cure for Headingley’s housing crisis.  The fundamental problem of the Headingley housing ‘crisis’, is the fact that the supply of homes to live in has not historically met demand, increasing property values (and in turn rents), thus ensuring home ownership becomes an unattainable ambition for the twenty something’s of Headingley.

Call me a realist, but it’s obvious that either demand needs to drop or supply needs to rise to stop this trend getting worse for the generations to come.  Don’t get me wrong, I admire Downing Street’s plans to build 200,000 starter homes which will be offered to first time buyers under 40 with a minimum 20% discount price.  However, the building of starter homes on current building sites, where new homes builders already have to build a certain number of affordable ‘starter’ homes at the moment under a different scheme, does not increase the stock of new ‘starter’ homes, it simply replaces one affordable scheme with another.

One option that could resolve the housing crisis is if the Government literally looked closer to home, concentrating on matching households with the appropriate sized home.

This compares to 957 households in Headingley that are overcrowded (i.e. there are more people than bedrooms in the property).

Therefore, I am beginning to see there is the spare capacity in the Headingley housing market.  Principally, I will concentrate on the group that makes up the bulk of this category, the owner occupiers of large properties, in their 60’s and 70’s, where the kids flew the nest back in the 80’s and 90’s.  They call it ‘downsizing’, when you sell a big property, where the extra bedrooms are no longer required, to move into a smaller and, usually, less expensive property.

However, there are many explanations why these individuals do not downsize.   These people have lived in the same house for 30, 40 even 50 years, and as one matures in life, many people do not want to depart from what they see as the family home.  Much time has been invested in making friends in the area and it’s nice to have all those rooms in case every grandchild decided to visit, at the same time, and they brought their friends!  But on a more serious note, more and more people are beginning to downsize earlier, but in my opinion, not at a fast enough rate.  As the years go one, we will have a situation where younger families will be living in smaller and smaller houses, whilst all the large houses with a couple of 70 something empty-nesters rattling around them!  I believe the Government should put more weight behind downsizing, because with the right incentives, many could be encouraged to think again and make the spare rooms available.

.. and it would have to be incentives, as the using the stick (instead of the carrot) would be political suicide for any party, especially the Tory’s.  One option is to allow retired downsizers not to pay stamp duty on the new property, saving them thousands of pounds and another for the planners to work with builders to build not only starter homes for under 40’s, but also have housing built just for retired downsizers ... or is this one step too far in ‘social engineering’?

The fact is not enough properties are being built in Headingley, and with population rising at a faster rate, something needs to be done.  However, I believe the Headingley population (and in fact the whole of the UK) is slowly turning into a more European model of house ownership.  In Europe, most people rent in their 20’s and 30’s, only buying in their 40’s and 50’s, when they inherit money from the sale of their late parent’s property.   That works particularly well in Germany and I can’t see why it can’t work here.  In the meantime, there is an opportunity in the coming 20 years for people to supplement their pension by buying smaller properties to rent out, as that is where the demand will be in the next few decades in Headingley.  For even more thoughts on the Headingley Property Market just give my other articles a read!
at 16:28 No comments:

Well as the nights draw in, if there is nothing on the telly, the significant other and myself like to play the board game Monopoly. The buying and renting of property, it’s like a busman’s holiday for me!

Interestingly, the game was originally invented at the turn of the 20th Century (in 1903) and the game was initially called ‘The Landlord’s Game’!  Anyway, after a few years in the wilderness, the current owners of the game renamed it in 1935 and so began Monopoly as we know it today.

So whether you are a homeowner or landlord in Headingley, what would a Monopoly board look like today in the suburb? Property prices over the last 80 years have certainly increased beyond all recognition, so looking at the original board, I have substituted some of the original streets with the most expensive and least expensive locations in Headingley today.

Initially, I have focused on the LS6 postcode only, looking at the Brown Squares on the board, the ‘new’ Old Kent Road in Headingley today would be Holborn Street, with an average value £88,100 (per property) and Whitechapel Road would be Woodbridge Vale, which would be worth £91,000. What about the posh dark blue squares of Park Lane and Mayfair? Again, looking at LS6, Park Lane would be Stretton Avenue at £420,648 and Mayfair would be Moorland Road at £542,800. However, look a little further afield from the LS6 postcode, and such roads as Park Lane in Roundhay would claim the Mayfair card at £629,250! Also, I can’t forget the train stations (my favourite squares), and over the last 12 months, the average price that property within a quarter mile of the station sold for was £127,300.

So that got me thinking what you would have had to have paid for a property in Headingley back in 1935, when the game originally came out?

· The average Headingley detached house today is worth £345,700 would have set you back 625 Pounds 9 shillings and 6 old pence.

· The average Headingley semi detached house today is worth £253,800 would have set you back 459 Pounds and 4 shillings.

· The average Headingley terraced / town house today is worth £239,500 would have set you back 433 Pounds 6 shillings and 6 old pence.

Anyway, I hope you enjoyed this bit of fun, but underlying all this is one important fact. Property investing is a long game, which has seen impressive rises over the last 80 years. In my previous articles I have talked about what is happening on a month by month or year by year basis and if you are going to invest in the Headingley property market, you should consider the Headingley property you buy a medium to long term investment, because Buy to let is pretty much what it sounds like – you buy a property in order to rent it out to tenants.

As I reminded a soon to be first time landlord from Headingley Terrace the other week, Buy to let in Headingley (as in other parts of the country) is very different from owning your own home. When you become a landlord, you are in essence running a small business – one with important legal responsibilities. On that note, I want to remind landlords of the recent and future changes in legislation when it comes to buy to let. This year, rules have changed about tenant deposits, carbon monoxide detectors and early in the New Year, landlords will have responsibilities to do immigration checks on all their tenants. Failure to adhere to them will mean a minimum of heavy fines in the thousands or in some cases, prison ... it’s a mine field!  That’s why I write the Headingley & Burley Property Blog, where it has an extensive library of articles like this one, where I talk about what is happening in the Headingley & Burley property market, what to buy (and sometimes not) in these areas and everything else that is important to know as a Headingley & Burley landlord.
at 12:55 No comments:

House in Burley with fantastic potential for 12% return 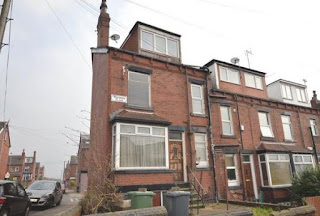 This fantastic 2 bed house on Woodside Place in Burley is on with Manning Stainton for a great low price of £95,000. It's positioned in a part of Burley that it much sought after for professionals with it's proximity to Kirkstall Road which has great links into the city centre.

From the looks of things, the place does need modernising. It will need a new kitchen, flooring, decorating and new furniture but with such a low asking price you'd still be making a good return on your investment.

What's more is that this property definitely has the potential to be made into a three bed. It currently has a very large living room in the basement that could easily be converted to a spacious third bedroom. You would then be able to utilise what is currently a large dining room next to the kitchen as the living room and you still wouldn't be compromising on space.

Houses providing this much space along with 3 large bedrooms in this area can easily achieve £1,050pcm. Even if you paid the asking price of £95,000 and spend around £10k doing up the place, you'd still be looking at a fantastic return of 12%.

With all of this potential I can guarantee it won't be on the market for long!