Private Renting in Burley increases by 251.7% in 20 years

You find me in a reflective mood today as I want to talk about the future of investing in property in Burley. The truth is that we have got complacent, with many people having mistaken the ever rising Burley (and in fact the whole of the UK) property market since the 1960’s as the eternal gift that kept giving as property prices constantly rose and doubled every five to seven years.

The days of making money from property as easy
as falling off a log, like taking candy from a baby are sadly over

Whilst George Osborne has decided now is the time to milk the ‘Golden Cow’ of UK’s private landlords, with changes in taxation for buy to let property, many pundits are predicting the end of buy to let as we know it. However, it is still possible to make a reasonable, profitable and safe return on property with these changes. You see, I have always seen investing in the Burley buy to let market (as I would anywhere in the UK), as I might see mother nature, creating some truly wonderful stunning warm weather but at the same time, she will bite, creating catastrophic situations such as snowstorms and hurricanes.  You need to study the market, take advice and opinions from many people and then decide what the proverbial property weather will be … remember, tenants will always want a roof over their head and I don’t see the Government building the millions of houses required to house them.

Nobody knows the future, and yes people can predict but I wouldn’t be afraid of this change... because as a famous French proverb says, (I told you I was a reflective mood today), ‘the more things change, the more they stay the same’.  I mean, no one could have predicted how the property market has changed in Burley over the last couple of decades? Looking specifically at the Leeds West Parliamentary Constituency, twenty years ago, 19,618 households (meaning 52.86% of property) was owned and only 1,853 households were privately rented (meaning 4.99% of property was rented out by private landlords). Roll the clocks on twenty years and the change has been seismic …. Now only 21,185 of properties in the Constituency are home-owners (a drop to only 51.48% being owner occupied) and the jump in private renting has been out of this world, as 7,223 properties are now privately rented proportionally 17.55%). (NB Neighbouring Constituencies show similar changes as well)

Who would have predicted in 1995 the private rental sector in
Burley would have grown by 251.7% in the proceeding 20 years?

The property market is constantly changing and buy to let for too long has been heavily dependent solely on house price growth, where yield has been almost forgotten.  I see the changes in tax and landlord and tenant law in a different perspective to the doom-mongers and see it as bringing many opportunities. You might need to change your buy to let benchmarks, your approach to financing or even consider places other than Burley in which to invest your money, but this will shine a light on investing in properties with healthier yields and create more realistic long term buy to let opportunities, instead of short term growth bets and wagers.

The advice I give to my landlords, and you my blog reading friends is this; these changes will make some landlords panic, meaning competition for decent Burley buy to let bargains will reduce as fear of change kicks in and amateur investors flee the market. These opportunities will provide a more stable platform for knowledgeable and wise Burley buy to let landlords to thrive in.
at 12:40 No comments:

Well the dust has settled and the General Election seems a distant memory, we can get back to a more normal property market, or that is what the based ‘Fleet Street’ journalists would lead you to believe.  You see I have been talking to many fellow property professionals in Headingley (solicitors, conveyancers and one the best sources of info – the chap who puts all the estate agent and letting boards up in Headingley, and all of them, every last one of them told me they didn’t see any change over April in business, compared to any other month on the lead up to the Election itself.

I am now of the opinion that maybe in the upmarket areas of Mayfair and Chelsea, the market went into spasm with the prospect of a Labour/SNP pact with their Mansion Tax for properties over £2,000,000, but in Headingley and the surrounding villages, there has only been one property sold above £2,000,000 mark in the last 7 years.

In a nutshell, the General Election in Headingley didn’t really have any impact on people’s confidence to buy property.  As I write this article, of 147 properties that have come on to the market in Headingley since the 2nd of April, 60 of them have a buyer and are sold subject to contract, that’s nearly one in three (40.82% to be precise).

I think that things are starting to change in the way people in Headingley (in fact the whole of the country as I talk to other agents around the UK) buy and sell property.  Back in the 1970’s, 80’s and 90’s, the norm was to buy a terraced house as soon as you left home and do it up.  Meanwhile, property prices had gone up, so you traded up to a 2 bed semi, then a 3 bed semi and repeated the process, until you found yourself in a large 4 bed detached house with a large mortgage.

Looking into this a little deeper like I have said in previous articles Headingley people’s attitude to homeownership itself has changed over the last ten years.  The pressure for youngsters to buy when young has gone as renting, not buying, is considered the norm for 20 something’s. This isn’t just a Headingley thing, but, a national thing, as I have noticed that people buy property by trading up (or down) because they need to, not because ‘it’s what people do’.  This does means there are a lot less properties on the market compared to the last decade.

A by-product of less people moving is less people selling their property. My research shows there are a lot fewer properties each month selling in Headingley (Pudsey) compared to the last decade.  For example, in February 2015, only 35 properties were sold in Headingley (Pudsey). Compare this to February 2002, and 45 properties sold and the same month in 2004, 69 properties.  I repeated the exercise on different sets of years, (comparing the same month to allow for seasonal variations) and the results were identical if not greater.  So what does this all mean?  Demand for Headingley property isn’t flying away, but with fewer properties for sale, it means property prices are proving reasonably stable too.

Stable, consistent and steady growth of property values in Headingley, year on year, without the massive peaks and troughs we saw in the late 1980’s and mid/late2000’s might just be the thing that the Headingley property market needs in the long term.
at 16:34 No comments: 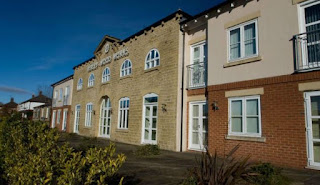 This attractive and modern 2 bed flat located in Burley Wood Court is in a prime location for professionals. Located on Kirkstall Road it's just set back off the main road with a bus stop straight outside making it ideal for commuters with Leeds City Centre less than 10 minutes away. It's also just a stones throw away from Cardigan Fields which is home to a cinema complex, gym, bowling alley & bars and restaurants so location wise this property has fantastic appeal and would easily rent out.

It's currently only being rented out as a 1 bed but as the ad correctly states, if the living room was utilised as a second bedroom you'd create a spacious second bedroom so you could easily achieve a monthly rent of £750pcm without the hassle of having to knock down walls etc. The current kitchen and dining room could easily be used as an open plan living room and kitchen and it still not lose any of it's appeal.

The rest of the property doesn't need any work doing to it as it's already been finished to a great standard.

If you were able to buy the property for around £105,000 you would be able to achieve a solid return of nearly 9%.